Inda Linda & HPV were the hares, Peterphile was the FRB, Gag Me Again was the FBI and Thumper Humper won the Brainless Award for crashing on trail.

Inda Linda came out early to pre-lay portions of this semi-live trail and HPV, her co-hare, arrived at the normal show time riding with OnSec, Urine Trouble, to help Inda lay the live portions of her trail. This was to be a special event, because "Gone Too Long" hasher, Gag Me Again, who used to hash with us regularly, was in town for the weekend and promised to show up. And show up she did, bringing other local hashers "Gone Too Long" hashers, Semper Felinus and Twatermelon (they used to hash together in Sierra Vista, AZ I think). Anyway, it was nice to see Gag Me Again again (am I repeating myself here, or what?).

Just prior to circling up, Mr Bigglesworth asked all the harriettes to get together for a group photo (as he usually does to promote the hash, as in "hey there are a lot of gorgeous babes that come out for this hash"). Smooth Copulator and Willy Wanka, both happily hooked up already, I guess, ignored Mr B's request for the photo op. Or else they're just camera shy or something? Immediately following, I asked that the men join the ladies as well for a group photo, but once again, the assumed "happily hooked up hashers declined, plus a few of the male hashers as well. Go figure?".

Once circle commenced, we identified one virgin in attendance, Taint Tickler had brought Virgin Lexx(C), a tall 22 year old hotty that he had been bragging about to several hashers prior to this hash. We're not really sure what gender Lexx was, but that's Okay, as Lexx was definitely hot, along with all the rest of us as as it was very hot and muggy day. Either way we were happy to welcome Virgin Lexx.

The hares asked for 10 minute to set this semi-live trail and were blessed accordingly and sent off in the normal JRH3 customary fashion for live (or semi-live) trail. Ranger Ralph, our Resident Asshole Religious Advisor for the day conducted the chalk talk for the hares that included an apartment complex gate security code in it for the pack to memorize so they could follow trail through some alleged apartments on trail. Just n case, Kitty Litter had the security code written on his forehead for everyone to refer to in case we forgot. So thanks for the head Kitty Litter!

Before Ranger Ralph could even finish chalk talk, 10 minutes had elapsed and the pack set off on trail! Almost immediately the pack came to a halt at the apartment complex with a locked gate in front of them. Gag Me Again had to go backwards about 100 yards to find the key pad device and punch in the codes. She appeared to be having trouble entering it until GRC showed up and entered the # sign after the code to make it work.  Meanwhile, Peterphile just rolled under that gate before it was opened, as it was about 1.5 feet off the ground. Several other hashers followed his example. Note to hashers: always try to go under fences and gates first before attempting to climb them or when security codes are involved as it may save you time and be less dangerous than attempting to climb them. Climbing over brick walls, however, proved to be faster upon exiting the apartment complex.

Upon exiting the apartment complex, trail crossed a road that had a lot of traffic on it. Noticing a slight break in traffic, Thumper Humper attempted to dart across the road and wound up tripping and falling in front of on coming traffic. I personally heard her say "so this is where I am going to die!" Luckily though, the traffic was overcome by all the hashers lurking around and had come to a halt, permitting Thumper Humper to avoid being killed and to continue her life for at least the rest of this trail.

From there we experienced several checks and count backs which pretty much kept the pack together up to the beer stop. No Tits For You drove the beer truck to the beer stop and Thumper Humper, gladly drove the beer van on to the end after experiencing her aforementioned near death experience. Thumper had actually volunteered to drive the beer truck prior to that, so its not like she bailed or anything. But I think she was happy to be done with trail at that point although she claimed no injuries were incurred (maybe just a little pride though).

After the beer stop, the pack began to stretch out out a bit and the FRB, Peterphile, wound up catching the hares just prior to a Turkey/Eagle Split (or was it a Tough/Easy Split?). After giving the hares an additional 5 minutes, the pack continued (on on) its trek back to the start, as it was an A to A trail.

During circle at the end Smack My Bitch Up was awarded a headband for accomplishing her 69th trail, HPV for his 400th trail and I for my 975th (although it was actually my 981st but I waited for GRC to attend before accepting the award, so she could present it to me).

Then HPV conducted a hash raffle where everybody got a prize (I had actually asked the Alt Raffle Meister, Puppy, to run the raffle, since HPV was haring, but HPV took it upon himself to gitter-done (did I spell that correctly?) on his own, so off he went. Most noteworthy was P-Thag who got a matching top and bottom ladies green outfit the matched his shoes (see photos).

Once the circle got underway, down downs were given to Gone Too Longs, Dances With Seaman, Just Jen, Gag Me Again, Semper Felinus, Twatermelon, POPS, Mr B and Metawhorical Sunshine. Speaking of Dances With Seaman, Whiney Bitch brought him his long lost hash mug, which should've been a lost property down down, but it got overlooked (or maybe I just missed it). I guess we should've brought Dances; son, Just Thorin, in too, as this was his 2nd JRH3 trail, but he was overlooked (I think).

Taint Tickler was brought in to drink twice. Once for having new shoes, of which he drank out of, and secondly to demonstrate to his virgin how to do a proper down down.

Accompanying Taint's Virgin Lexx in the circle was Pop's friend Observer Michelle and some other tall dude. Virgin Lexx showed a lady part (we think) and the other 2 told a short joke and sang a short song (I think). Things started getting blurry at this point for me.

There was some discussion about trying to name Just Matt(L) prior to this hash, but his sponsor, Cockeyed had texted me earlier requesting we wait until he could be present before naming him, so it was nixed.

Upon announcing that we needed a hare for next Wed, Jul 30th, Dog F*cker raised his hand and volunteered to do it. Later Dog let me know that trail next Wednesday will be somewhere in south Tampa. Since then, Kitty Litter informed me he and Diaper Dasher would be haring on this date instead starting from the NW corner of Manhattan & Gandy in Tampa with the on after at the I Don't Care Bar where there will be FREE FOOD! Bring your singing voices, as KL plans to hold choir practice! For complete info, go to http://jollyrogerh3.com/2014_07_30_Directions.htm.

It should be noted that no pink, blue or purple chalk was observed on trail. Guess who was not in attendance (their initials are DD and SN), Lol (see the last hash trash to make sense out of that).

All in all it was just another shitty hash.

Did I forget to mention anybody?

Dab
With way too much time on my hands....

Meet in the over flow parking lot for Mr Dunderbak's, located just NE at approximately 15049 Bruce B Downs Blvd Tampa, FL 33647,  https://goo.gl/maps/Y239p.  ts in the same parking lot as Quest Martial Arts and some daycare center. 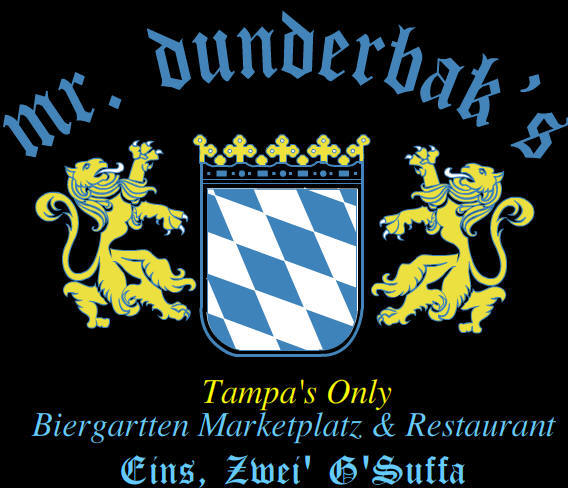 Directions: From I-275 & I-4, in central Tampa, go north on I-275 for 8 miles to Exit 53. Go right/east on Bearss Ave for 2 miles, left on Bruce B Downs for 1 mile and find the Quest Martial Arts on the right just past Gilligan's Way, https://goo.gl/maps/hVHwa.

Hares: Inda Linda & HPV will be the hares.

Donations: Suggest $7 for beer drinkers and $4 for non-drinkers.

Hash Raffle: Bring stuff to donate to the hash raffle if you like, or not. You don't have to bring something to get something. We have plenty of lost items we are trying to get rid of. One hashers trash is a pirate hashers treasure!

On After: The on after will be at the Mr Dunderbak's, located at 14929 Bruce B Downs Blvd, Tampa, FL 33613, back near the start. To get there from the starting location, go left on Bruce B Downs, make the first left onto Gilligan's Way, right into the parking lot and find Dunderbak's on the left, https://goo.gl/maps/eF78K.