Taint Tickler was the hare, Swallows The Leader was the FRB, Just Valeri was the FBI and JustMatt won the Brainless Award.

There were a total of 17 faces that showed up to this hash. We met in a dirt lot under the Selmon Expressway across the street from the old "Underground" nightclub at E Whiting St and  East St, which was apparently being used to host one of the Fetish Con after hour parties, or else there were just a bunch of freaky looking people going in and out of there. Anyway, before the circle at the start even began,

Access All Areas had to leave as she was called into work for some kind of an emergency, although I think it had more to do with Will Sing 4 Head's dominance costume and paraphernalia scaring her off. The rest of the pack, including Public Transportation, WS4H's slave, suffered through many a beating from WS4H throughout the course of the hash. And as usual, Spread Cheeks showed up right before trail, only this time sporting a black leather mask and large gothic looking Axe. If it had been any other day in downtown Tampa, Spread Cheeks probably would've been arrested for carrying such a huge weapon and looking so dangerous.

During circle at the start, out-of-town visitor, Swallows The Leader did his first JRH3 trail. He was given the usual welcoming and asked to prepare some sort of entertainment for us during the circle at the end. He says he will be with us until sometime in October. He's some sort of a military dude temporarily assigned to MacDill AFB. Anyway, welcome Swallows!

HPV was given both the  FRB and the FBI chains to carry on trail because he was the most recent FRB (according to OnSec Puppy that is, who was

actually it) and because there were no harrierettes present that were on the list. Actually, Puppy fibbed here again, as Bed-N-Bucfest's, our RA for this hash, was on the list. I guess Puppy just thought it fitting for HPV to carry both chains to continue the punishment for him buying a really heavy FRB chain for us to carry that has long since disappeared. Either way, HPV went along with the gag and carried both. I guess it served as his Fetish costume since he really didn't have one on. Except for wearing all black that is.

After a brief chalk talk, the pack set off on trail! It started off with a check just west of the starting location where most of the pack was sucked into a rather long YBF. Eventually the pack found true trail that led us slightly southwestward and then into a parking garage. Taint Tickler, our dead hare, who had pre-laid the trail, was advised by me to only use chalk marks if he entered any parking garages because of our fiasco a few years back when the HAZMAT Team got called out on our 9/11 trail. And chalk it was in the garages, so thanks Taint for not getting us busted. We had alerted both the downtown police and the HAZMAT Team anyways, just in case. We pretty much always do advise the authorities ever since the 9/11 incident; especially when trail is set in downtown Tampa, and especially if trail goes through any parking garages. But I digress...

Trail next led us up Ashley St to the north past the Hilton where the Fetish Con was going on. This is as far as our walkers ever got. Apparently they went into the Hilton and hooked up with some other hashers who were attending Fetish Con and decided to hang out in the bar for awhile and have a few drinks. Oh well, it was a Fetish Con Hash.

The runners continued northward and then turned east along the Hillsborough River. Trail eventually veered to the south away from the river and entered a construction zone underneath I-275 where there were several mountains of dirt to climb over to get to the north side of I-275. From there trail pretty much stayed under I-275 and continued eastward for awhile until finally turning south to the beer stop, which was just north of the Oaklawn Cemetery. Trail pretty much went straight south from there back to the start where the walkers were nowhere to be found (I hightailed it to the end on my bicycle to check so I could advise the beer truck driver when to bring the beer truck to the end). They were still at the Hilton whooping it up and finally arrived after all of the runners made it in, as it should be. 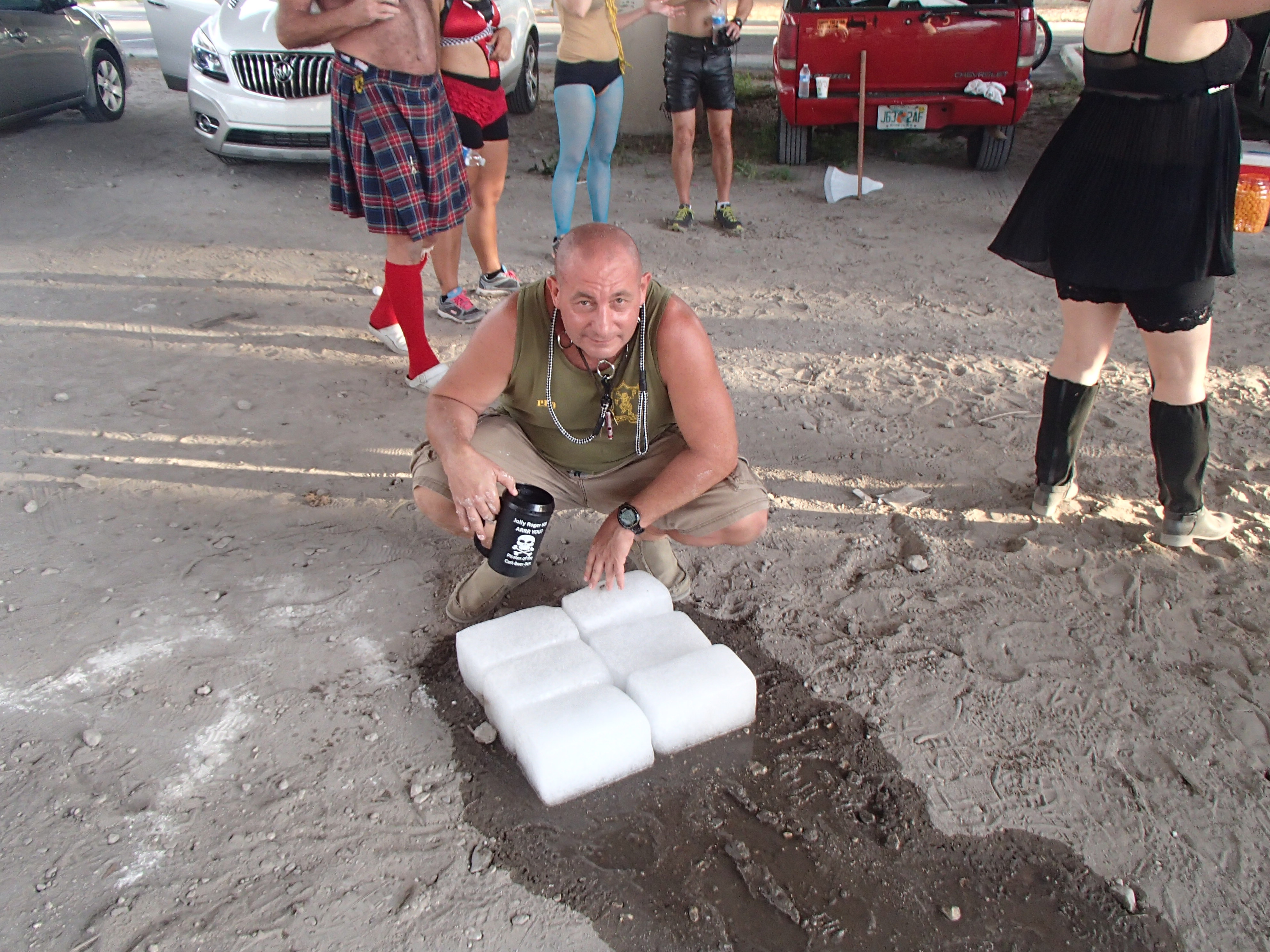 During circle at the end, our hare, Taint Tickler, had 6 pieces of block ice laid out on the ground for us for those hot enough to do bare ass down downs. I normally advise against doing ice down downs in the JRH3, but since it was the Fetish Con Hash and everyone was told it was optional, I went along with it. I think ice down downs are really only acceptable when the hare(s) lay a really, really shitty trail and the pack decides to put them on ice for the entire circle. But, ultimately, the pack does rule. Anyway, the first one on the ice, was Taint for trail trial. It was about an even split on the thumbs up/down vote. However, we took an exceptionally long time to get through it so Taint could enjoy the ice for the maximum time possible.

Immediately after trail trial, HPV, our Raffle Meister, conducted a hash raffle. One of the prizes, reserved for the harriettes only, was a note from Taint offering himself to be a their slave for the remainder of the hash. Gritty Kitty won Taint as her prize and was given a 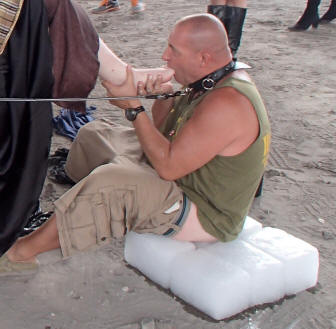 leash to put on Taint for the rest of circle.  Her first command was a toe suck from Taint while he sat on the ice. Taint swears it gave him a woody, but I don't think anybody looked to find out if he was being truthful.

After rest of the raffle prizes were awarded, the circle continued by awarding Swallows with the FRB award and Just Valerie with the FBI award. Both took their penance on the ice. Immediately following their bare ass down down on the ice, Taint bent down and licked the ice where they had been sitting. We're not sure which hasher spot he licked, as it was rather a quick lick.  Just Matt (L) was then awarded a bandana for accomplishing his 10th JRH3 trail with the JRH3. Soon afterwards, Just Matt was brought back into circle again for winning the Brainless Award. It something to do with slapping people with fans, I think?

Somewhere near the end of circle, U-Drive showed up and drank for being a late cummer and announced her upcoming Super Soaker Hash & Pool Party scheduled for Sep 20th. I announced next the next JRH3 as being Wed, Aug 13th, where out-of-town visiting hasher Ookie Cookie will be haring a trail starting from Love's Artifacts Bar & Grill, located at 4914 S MacDill Ave, just south of Gandy. And of course, I announced the Jan 2015 hash cruise.

Leprcock was present, but rather quiet. I think he was overwhelmed with the eyeful he got while at the Hilton hanging out with the Fetish Con attendees. Also I think overwhelmed, was Just Melissa (P), Just Valerie's room mate (I think), who did enjoy the ice for one drink and was later observed locking lips with one of the harrierettes after circle. And she's straight. I guess the fetish came out in her, huh? My fetish is, I like loosers, like the Buccaneers, so I wore a Bucs T-shirt. Wow, I sure caught hell for saying that in front of B&B!

I went straight home after circle, where GRC was awaiting for me in the pool, but I heard the on after kind of got hi-jacked and the pack instead went to Gritty Kitty's house, nearby, to wake Whiney Bitch from taking a siesta instead of coming to the hash.

All in all, it was just another shitty hash.

Note: to view the rest of the photos from this hash, click here.

Dress in your best fetish outfit, or bring your favorite fetish paraphernalia along, as the Fetish Con & Fetish Con parties will be going on around downtown Tampa.

Directions: From I-127, take the downtown Tampa, Ashley St exit. Once on N Ashley continue southbound for 0.6 miles. Go left on E Whiting for 0.4 miles and find the starting location on the right just prior to Nebraska, https://goo.gl/maps/Hy7T4.

Hares: Taint Tickler will be the hare.

Hash Raffle: One hashers trash is a pirate hasher's treasure! Feel free to bring something to donate if you like, or not. We already have plenty of stuff to giveaway. You don't need to donate something to get something. But you can donate if you want to. Rumor hash it that Taint will be raffling himself off to be the winner's bitch for the evening. Other similar prizes may also be donated (hint, hint).

Body Plastering: Fellow hashers, Plaster Bait Her and his wife, They Float, will be at the actual Fetish Con at the downtown Tampa Hilton, located at 211 N Tampa St, Tampa, FL 33602 https://goo.gl/maps/HiOZL, doing a body plastering demonstration between 2:45 and 4:15 PM, on Sat, Aug 9th. If interested in getting plastered at the Fetish Con, or privately in their hotel room, at the Hilton, contact Plaster Bait Her at 727-743-3213. They will be available Thu thru Sun.

Printable Copy: Click here for a printable copy of this info.